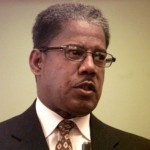 Marsh earned his Bachelor of Arts degree in sociology from Virginia Union University in 1956 and his Bachelor of Laws degree from Howard University School of Law in 1959. After law school, he formed a law firm and concentrated primarily on civil rights law.

In 1968, Marsh participated in Quarles v. Phillip Morris where the court held that the Phillip Morris Company was in violation of the Civil Rights Act of 1964 by continuing to have discriminatory advancement practices that unfairly kept blacks from being promoted within the company. After that, he successfully litigated more than 20 employment discrimination cases, most of which were class action cases representing thousands of African American and female litigants. Also that year, he participated in Brewer v. School Board of City of Norfolk, the first of more than 50 school desegregation cases he handled.