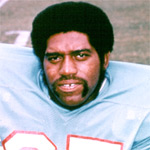 Bethea played college football at North Carolina A&T State University and graduated with a bachelor’s degree in physical education in 1968.

He was selected by the Houston Oilers in the 1968 AFL Draft. Over his 16 season professional career, Bethea was an eight-time Pro Bowl selection. He retired in 1983 with 105 quarterback sacks and that same year the Oilers retired his jersey number 65. Bethea was inducted into the Pro Football Hall of Fame in 2003 and in 2005 he published his autobiography, “Smash Mouth: My Football Journey from Trenton to Canton.”