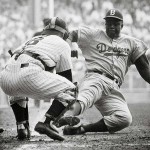 July 23, 1962 Jack Roosevelt “Jackie” Robinson became the first African American to be inducted into the Baseball Hall of Fame.

Robinson was born January 31, 1919 in Cairo, Georgia. He attended the University of California at Los Angeles, where he was a star athlete, from 1939 to 1941 and served in the United States Army as a first lieutenant from 1942 to 1945.

Robinson broke the major league baseball color line when he debuted with the Brooklyn Dodgers in 1947. Over his ten season professional career, he won the Rookie of the Year Award in 1947, the National League Most Valuable Player Award in 1949, and was selected to six consecutive All-Star Games. Robinson retired in 1956 and that same year was awarded the NAACP Spingarn Medal. In the 1960s, Robinson helped to establish Freedom National Bank, an African American owned and operated financial institution in New York City.

Robinson died October 24, 1972. In 1987 Major League Baseball renamed the Rookie of the Year Award the Jackie Robinson Award and in 1997 permanently retired his jersey number 42. In recognition of his achievements on and off the field, Robinson was posthumously awarded the Presidential Medal of Freedom, the nation’s highest civilian honor, by President Ronald Reagan in 1984 and the Congressional Gold Medal by President George W. Bush in 2005.

Jackie Robinson published his autobiography, “I Never Had It Made,” in 1972. There are numerous other books about Robinson, including “Baseball’s Great Experiment: Jackie Robinson and His Legacy” (1983) and “Promises to Keep: How Jackie Robinson Changed America” (2004).