By Chimsima Zuhri on May 25, 2011 in African American History, May, Music 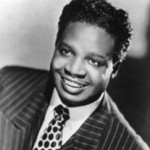 Brown was born September 10, 1925 in New Orleans, Louisiana. He started singing gospel music in the church choir. In 1947, he wrote and recorded “Good Rocking Tonight” which was a hit, reaching number 13 on the Billboard R&B charts. That song was subsequently covered by such rock and roll stars as Elvis Presley, Ricky Nelson, Jerry Lee Lewis, and Pat Boone.