By Chimsima Zuhri on May 7, 2011 in African American History, Civil Rights, May, Religion 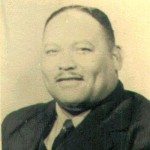 Lee was born in 1904 in Edwards, Mississippi and in the early 1930’s accepted a call to preach in Belzoni, Mississippi. Over time, Lee led four churches, opened a grocery store, and set up a printing business. In 1953, he co-founded the Belzoni branch of the NAACP. Lee was also Vice President of the Regional Council of Negro Leadership, an organization that promoted self-help, business, and voting rights.

Less than a month after delivering a speech at the organization’s annual meeting, Lee was shot and killed by an unidentified assailant. No charges were ever brought against anyone for the murder.