By Chimsima Zuhri on May 1, 2011 in African American History, Civil Rights, May, Medicine 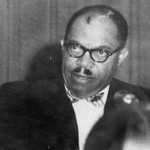 Howard was born March 4, 1908 in Murray, Kentucky. During his years in medical school, Howard took part in civil rights and political causes, including writing a regular column for the black newspaper in Los Angeles. He was also the president of the California Economic, Commercial and Political League which championed black business ownership and the study of black history.

In 1942, Howard became the first chief surgeon at the hospital of the International Order of Twelve Knights and Daughters of Tabor in Mound Bayou, Mississippi. While there, he founded an insurance company, restaurant, hospital, home construction firm, and a large farm. He also built a zoo, a park, and the first swimming pool for Blacks in Mississippi. In 1951, Howard founded the Regional Council of Negro Leadership which mounted a successful boycott of service stations that denied restrooms to blacks.

Howard moved into the national spotlight after the murder of Emmitt Till when he became heavily involved in the search for evidence and made his home the command center for witnesses and journalist. In late 1955, Howard was forced to move to Chicago due to death threats and economic pressure. There he founded the Howard Medical Center and served for one year as president of the National Medical Association. In 1971, Operation Push was founded in Howard’s home and he chaired the organization’s finance committee.