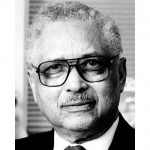 In 1950, Sullivan moved to Philadelphia and became pastor of Zion Baptist Church where he served for 38 years, increasing its membership from 600 to 6,000 and becoming known as “the Lion of Zion.” In 1958, Sullivan led a boycott of local businesses with the slogan “don’t buy where you don’t work” that resulted in thousands of jobs for African Americans over a period of four years.

In 1964, he founded Opportunities Industrialization Centers of America which offered job training, instruction in life skills, and assistance in job placement. The organization grew into 60 affiliated programs in 30 states and served over 2 million disadvantaged and under-skilled people.

In 1971, Sullivan joined the Board of Directors of General Motors Corporation, becoming the first African American to serve on the board of a major corporation. In 1977, he developed a code of conduct for companies operating in South Africa during apartheid called the Sullivan Principles.

Sullivan was the recipient of many awards, including the Spingarn Medal from the NAACP in 1971, the Presidential Medal of Freedom, the highest civilian award that the American government can give, from President George H. W. Bush in 1992, the Eleanor Roosevelt Award for Human Rights from President William Clinton in 1999, and honorary doctorate degrees from more than 50 colleges and universities. Sullivan authored several books, including “Build Brother Build” (1969) and “Moving Mountains” (1998).