By Chimsima Zuhri on February 24, 2012 in African American History, February 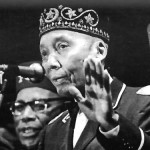 February 24, 1975 Elijah Muhammad, leader of the Nation of Islam, died.

Muhammad was born Elijah Poole on October 7, 1897 in Sandersville, Georgia.

By the fourth grade, he left school to work in the fields and at 16 left home to work in factories and businesses in the area. In 1923, Poole and his family moved to Hamtramck, Michigan. In 1931, he converted to Islam and changed his name to Muhammad and in 1932 he took over leadership of Temple No. 1 in Detroit, Michigan. In 1934, Muhammad was named Minister of Islam. In 1942, he was charged with eight counts of sedition for instructing his followers not to register with Selective Service or serve in the military. Found guilty, he served four years in prison.

Following his release from prison, the Nation of Islam grew significantly and by the 1970s they owned businesses, farmland, schools, and a bank. In 1972, Muhammad stated that the NOI had a net worth of $75 million. In the early 1990s, the City of Detroit renamed part of Linwood Avenue “Elijah Muhammad Boulevard.” Several books have been published about Muhammad, including “An Original Man: The Life and Times of Elijah Muhammad” (1998) and “The Messenger: The Rise and Fall of Elijah Muhammad” (2001).