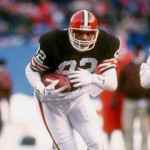 Newsome played college football at the University of Alabama and was an All-American in 1977.

He earned his bachelor’s degree in recreation administration in 1978. He was selected by the Cleveland Browns in the 1978 NFL Draft and over his 13 season professional career was a three-time Pro Bowl selection. In 1990, Newsome won the Whizzer White NFL Man of the Year Award for his community service. In 2002, he received the United States Sports Academy’s highest honor, the Eagle Award, in recognition of his significant contributions to international sport. Also in 2002, Newsome was named general manager of the Baltimore Ravens, the first African American named to that position in the National Football League.

In 2003, he was named the Walter Camp Man of the Year which annually honors an individual who has been closely associated football as a player or coach. The individual must have attained a measure of success and been a leader in his chosen profession. Newsome was inducted into the College Football Hall of Fame in 1994 and the Pro Football Hall of Fame in 1999. Newsome is considered one of the best general managers in the NFL.