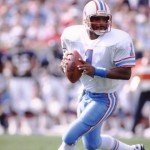 Although Moon was a star high school quarterback, none of the major colleges were interested in him as a quarterback therefore he enrolled in West Los Angeles College where he set a number of records. Based on that performance, the University of Washington signed him and in 1978 he led them to the Rose Bowl where he was named Most Valuable Player.

After completing his college career and earning his Bachelor of Science degree in 1978, Moon was not drafted by any team in the National Football League because he was black and refused to play any position other than quarterback. Therefore he signed with the Edmonton Eskimos in the Canadian Football League who he led to five consecutive Grey Cup victories from 1978 to 1982 and in 1983 was named the CFL’s Most Outstanding Player. In 1984, he was signed by the Houston Oilers of the National Football League and over his 17 year NFL career was a nine-time All Pro and in 1990 was the NFL Offensive Player of the Year.

Moon’s autobiography, “Never Give Up on Your Dream: My Journey,” was published in 2009.