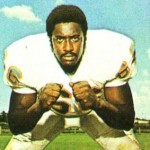 Little played college football at Bethune-Cookman College and was signed by the San Diego Chargers of the American Football League as a free agent in 1967.

Over his 14 season professional career as an offensive lineman, Little was a 5-time All-Pro selection and was selected to the NFL 1970s All-Decade Team.

After retiring from professional football in 1980, Little served as head coach for his alma mater and North Carolina Central University. He was inducted into the Pro Football Hall of Fame in 1993