By Chimsima Zuhri on May 31, 2011 in African American History, May, Politics 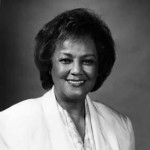 Lafontant-Mankarious was born April 28, 1922 in Chicago, Illinois. She earned her bachelor’s degree in political science from Oberlin College in 1943 and in 1946 she became the first African American woman to graduate from the University of Chicago Law School. In 1955, President Dwight Eisenhower appointed her an assistant United States attorney for the Northern District of Illinois.

In 1960, she gave the seconding speech for Richard Nixon’s nomination to be the Republican Party candidate for president. In 1963, Lafontant-Mankarious became the first black woman to argue a case before the U. S. Supreme Court. President Richard Nixon appointed her vice chairman of the U. S. Advisory Commission on International, Educational and Cultural Affairs in 1969, representative to the General Assembly of the United Nations in 1972, and the first female deputy solicitor general in 1973.

Lafontant-Mankarious left the Nixon administration in 1975 and practiced law until 1989. From 1989 to 1993, she served as Ambassador-at-Large and U. S. Coordinator for Refugee Affairs in the administration of President George H. W. Bush.