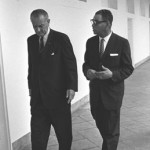 Martin was born November 18, 1912 in Shelbyville, Tennessee, but grew up in Savannah, Georgia. He earned his Bachelor of Arts degree in journalism from the University of Michigan in 1934 and in 1936 was hired as a reporter for the Chicago Defender. Six months later, he returned to Michigan to launch a new black newspaper, The Michigan Chronicle.

For the next eleven years, Martin served as the editor and publisher of the newspaper. In 1940, he was one of the founders of the National Newspaper Publishers Association, an organization of black newspaper publishers, and in 1970 he was a co-founder of the Joint Center for Political and Economic Studies, a research organization providing technical support for black officeholders and scholars.

For more than half a century, Martin was a participant on the national political scene, advising Presidents John F. Kennedy, Lyndon B. Johnson, and Jimmy Carter and becoming known as the “Godfather of Black Politics.” In 1997, his biography, “Walking with Presidents,” was published.