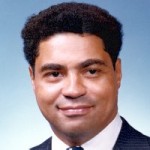 Perry was born December 5, 1931 in Ypsilanti, Michigan. He played college football at the University of Michigan where he was an All-American receiver. After earning his Bachelor of Arts degree in 1953, Perry was selected by the Pittsburgh Steelers in the 1953 NFL Draft. After serving in the United States Air Force and earning the rank of 1st lieutenant, he joined the Steelers in 1956.

His professional career ended after six games when a serious injury forced him to retire. The Steelers then hired him as an assistant coach and talent scout. Perry left the Steelers in 1958 to earn his Juris Doctorate degree from Detroit College of Law in 1960. In 1966, Perry became the first African American color analyst for CBS Television when they hired him to broadcast Steelers games. In 1973, Chrysler Corporation appointed Perry plant manager of its Detroit Universal Division, making him the first African American to hold that position at a U.S. automobile company.

In 1975, President Gerald Ford appointed Perry chairman of the Equal Employment Opportunity Commission, a position he held for a year. From 1990 to 1995, Perry served as director of Michigan’s Department of Labor and from 1996 to his retirement in 1999 as the first director of the Office of Urban Programs.