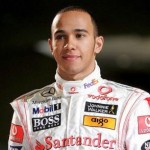 Hamilton’s father bought him a radio controlled car at the age of six and in 1992 Hamilton finished second in the national British Radio Car Association championship. He began his automobile racing career in the 2001 British Formula Renault Winter Series and in 2003 won the championship.

In 2007, Hamilton debuted in Formula One and finished second in the championship. He won the world championship the following season. He has finished fifth, fourth, and fifth the last three years. Hamilton was made a member of the Order of the British Empire by Queen Elizabeth II in the 2009 New Year Honours. He published his autobiography, “Lewis Hamilton: My Story,” in 2007. A number of other biographies have been written about him, including “Lewis Hamilton: A Dream Comes True” (2007) and “Lewis Hamilton: The Rise of F1’s New Superstar”(2008).