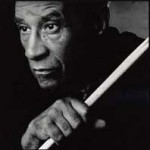 Maxwell Roach was born January 10, 1924 in Newland, North Carolina. At the age of 10, Roach was playing drums in gospel bands and by 18 he was playing in jazz clubs. Roach’s most significant innovations came in the 1940s when he devised a new concept of musical time. He studied classical percussion at the Manhattan School of Music from 1950 to 1953 and earned his Bachelor of Arts degree in music composition.

In 1952, he co-founded Debut Records with Charles Mingus. In 1960, Roach composed the “We Insist! – Freedom Now” suite to commemorate the 100th anniversary of the Emancipation Proclamation. Among the most important records made by Roach is “Money Jungle” (1962) with Mingus and Duke Ellington, generally regarded as one of the finest trio albums ever made. Roach spent the 1980s and 1990s continually finding new forms of musical expression and presentation.

In 1980, Roach was inducted into the Downbeat Jazz Hall of Fame and in 1984 he was designated a NEA Jazz Master by the National Endowment for the Arts. In 1986, a park in London was named in his honor and he was recognized with a MacArthur Foundation “genius” grant in 1988. In 2008, Roach was honored with a Grammy Lifetime Achievement Award.