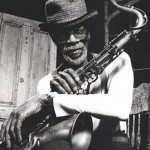 Henderson was born April 24, 1937 in Lima, Ohio. He was encouraged to study music at a young age and by 18 was studying at Wayne State University in Detroit, Michigan and playing on the local jazz scene. After serving in the United States Army from 1960 to 1962, he moved to New York City and joined Horace Silver’s band.

In 1992, Henderson won the Grammy Award for Best Instrumental Jazz Solo and Record of the Year from Down Beat Magazine for “Lush Life” and in 1993 he won the Grammy Award for Best Jazz Instrumentalist and Jazz Record of the Year from Billboard Magazine for “So Near, So Far.” Henderson was designated a NEA Jazz Master by the National Endowment for the Arts, the highest honor in jazz, in 1999.

In 2001, he was posthumously inducted into the Down Beat Jazz Hall of Fame.