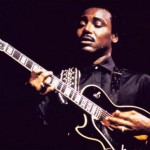 In 1976, Benson began to add his voice to his playing with the release of “Breezin’” which won three Grammy Awards and became the best selling jazz album of all time. “This Masquerade” from that album won the Grammy Award for Record of the Year. Two years later, “On Broadway” from the album “Weekend in L. A.” won a Grammy Award for Best R&B Vocal Performance.