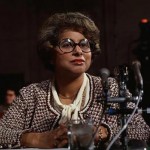 In 1977, President Jimmy Carter appointed Harris Secretary of Housing and Urban Development and in 1979 she became Secretary of Health, Education and Welfare where she served until 1981. In 1982, she was appointed a professor at the George Washington National Law Center, a position she held until her death.