By Chimsima Zuhri on February 10, 2011 in African American History, February 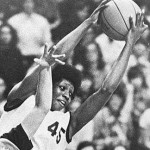 Harris attended Delta State University and led them to the AIAW National Championship three consecutive years between 1975 and 1977. She was also named All-American each of those years. When she graduated, she held 15 of 18 Delta State team, single game, and career records. She also held the record for most points scored by a woman in a college game at that time.

In 1977, Harris was the inaugural winner of the Broderick Cup as the outstanding female athlete in college. Harris also led the United States women’s basketball team to the Silver medal at the 1976 Montreal Olympic Games. The next year, she was the first and only woman to be selected in the NBA Draft when she was drafted by the New Orleans Jazz.

Harris graduated from Delta State with a degree in health, physical education and recreation and worked for the university as an admissions counselor and assistant basketball coach. In 1984, she earned a master’s degree from the university in education. In 1992, Harris became one of the first two women to be inducted into the Naismith Memorial Basketball Hall of Fame.

In 1998, she was an inaugural inductee to the Women’s Basketball Hall of Fame.