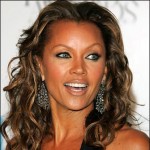 Williams began competing in beauty pageants in the early 1980s and in September, 1983 was crowned Miss America 1984, the first Miss America of African descent. Her short reign was initially marred by the fact that she became the target of racially based death threats and hate mail. After some potentially embarrassing photographs were discovered, Williams resigned in July, 1984.

She can be currently seen in the ABC television comedy “Ugly Betty,” for which she received an Emmy Award nomination for Outstanding Supporting Actress, and “Desperate Housewives.”