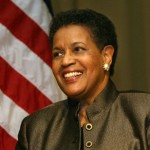 While attending Alcorn A&M College, she met Medgar Evers and they were married in 1951. Evers was murdered in 1963 because of his civil rights activities. Evers-Williams graduated from Pomona College in 1968, with a degree in sociology and served as director of consumer affairs for Atlantic Richfield Company. In 1971, she helped found the National Women’s Political Caucus.

In 1987, Evers-Williams became the first African American woman to serve as a commissioner on the Los Angeles Board of Public Works. In 1995, she became the first woman to serve as chairperson of the NAACP board, a position she held until 1998. That same year, she received the NAACP Spingarn Medal. Evers-Williams has co-authored two books, “For Us, the Living” (1967) and “Watch Me Fly: What I Learned On the Way to Becoming the Woman I Was Meant to Be” (1999).