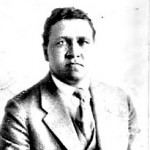 In 1911, Tobias joined the YMCA where he held various positions in the organization’s Colored Work Department. After leaving the YMCA in 1946, he became the first Black director of the Phelps-Stokes Fund, a foundation devoted to the improvement of educational opportunities for African Americans. He retired from that position in 1953.

Tobias also served on the Board of Trustees of the NAACP, serving as chairman in 1953. Also in 1953, Tobias served as an alternate representative to the United Nations for the United States. Additionally, he served on the boards of Hampton Institute, Palmer Memorial Institute, and the American Bible Society.

In 1948, Tobias was the recipient of the NAACP Spingarn Medal.