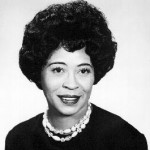 Bates was born November 11, 1914 in Huttig, Arkansas. In 1941, Bates and her husband started a local Black newspaper, The Arkansas State Press, which was an avid voice for civil rights. In 1952, she was elected president of the Arkansas State Conference of NAACP branches.

Bates guided and advised the nine students, known as the Little Rock Nine, when they attempted to enroll at Little Rock Central High School in 1957. Her involvement in that resulted in the loss of much advertising revenue to their newspaper and it was forced to close in 1959. Bates was the 1958 recipient of the NAACP Spingarn Medal.

In 1960, Bates moved to New York City and wrote her memoir, “The Long Shadow of Little Rock,” which won a 1988 National Book Award. The Daisy Bates Elementary School in Little Rock is named in her honor and the 3rd Monday of February is designated Daisy Gatson Bates Day, an official state holiday.