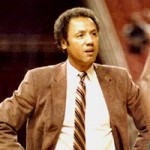 Wilkins was a two time All-American at Providence College and when he graduated with a degree in economics he was second highest scorer in the college’s history. Providence retired his jersey number in 1996, making Wilkins the first alumnus to receive that honor. Wilkins was selected by the St. Louis Hawks in the 1960 NBA Draft and over his 15 season professional career was a nine-time NBA All-Star and at the time of his retirement in 1975 had the second most career assists in NBA history.

After retiring as a player, Wilkins coached in the NBA for 35 years. He was named Coach of the Year in 1994 and retired with the most wins and losses as a coach in NBA history. He also coached the 1996 Atlanta Olympic Champion Men’s Basketball team. Wilkins is one of three individuals to be inducted into the Naismith Memorial Basketball Hall of Fame as both a player and a coach. He was inducted into the hall as a player in 1989 and as a coach in 1998. In 1996, the NBA named Wilkins one of the 50 Greatest Players and 10 Greatest Coaches in league history, the only person named to both lists.

Wilkins founded the Lenny Wilkins Foundation in 1970 “to fund organizations that deliver healthcare and education services to young people while honoring their dignity and sense of self-respect.”