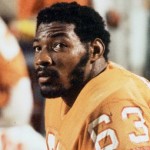 Selmon played college football at the University of Oklahoma where he was an All-American in 1974 and 1975. In 1975, he won the Lombardi Award and the Outland Trophy as the best college football lineman in the country. Selmon was selected by the Tampa Bay Buccaneers in the 1976 NFL Draft.

Over his nine season professional career, Selmon was a six-time Pro Bowl selection and in 1979 was named the NFL Defensive Player of the Year. Selmon retired after the 1984 season and in 1986 the Buccaneers retired his uniform number 63. From 1993 to 2001, Selmon served as assistant athletic director at the University of South Florida before being promoted to athletic director at the college.

In 1999, The Lee Roy Selmon Crosstown Expressway in Hillsborough County, Florida was named in his honor. Selmon died September 4, 2011.