By Chimsima Zuhri on September 19, 2010 in African American History, September 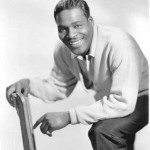 At the age of 18, Peay moved to New York to pursue his music career. There he changed his name to Brook Benton, at the suggestion of his record label, and earned a good living writing songs for Nat King Cole and Clyde McPhatter, for whom he wrote “A Lover’s Question.”

In 1959, he made his breakthrough as a solo artist with “It’s Just a Matter of Time” and “Endlessly,” both of which were written by him and Clyde Otis. In 1960, Benton had two hit duets with Dinah Washington, “You Got What It Takes” and “A Rockin’ Good Way (To Mess Around and Fall in Love).”