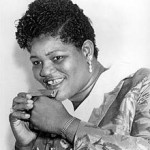 Thornton began to sing at a very early age and at 14 she joined the Hot Harlem Revue and toured with them for seven years. Thornton began her recording career in 1951 and the next year recorded “Hound Dog.”

She was the first to record the song which was number one on the R&B charts for seven weeks and sold almost two million copies. Although the record made her a star, she received little of the profits. Although her career began to fade in the 1960s, she continued to record, including “Big Mama Thornton with The Muddy Waters Band” (1966), “Ball ‘n’ Chain” (1968) and her last album “Jail” (1975). Over her career, Thornton wrote more than 20 blues songs. Thornton died July 25, 1984 the same year that she was inducted into the Blues Hall of Fame.