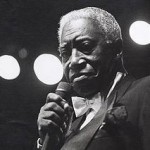 By his early teens, Williams had taught himself to play the piano and formed his own gospel group. By 1939, he had started to tour with established bands and got his big break in 1954 when he was hired as the male vocalist for the Count Basie Orchestra, where he remained until 1961.

His first album was recorded in 1955, “Count Basie Swings, Joe Williams Sings” and contained the single “Every Day I Have the Blues” which reached number two on the R&B charts. That recording was inducted into the Grammy Hall of Fame in 1992 as a recording of “lasting qualitative or historical significance.” By the 1970s, Williams was appearing regularly on such variety shows as “The Tonight Show” and “The Steve Allen Show.” Williams was nominated for eight Grammy Awards and in 1985 he won the Grammy Award for Best Jazz Vocalist for the album “Nothin’ but the Blues.”

Williams worked regularly until his death on March 29, 1999. In 1983, he was given a star on the Hollywood Walk of Fame, in 1993 he was designated a NEA Jazz Master, the highest honor the United States bestowed on a jazz musician, by the National Endowment for the Arts, and in 1995 he was inducted into the Big Band and Jazz Hall of Fame. Prior to his death, Williams established the Joe Williams Every Day Foundation to provide support for music and musicians, especially those in jazz, and to create career opportunities for deserving young talent. Williams’ biography, “Every Day: The Story of Joe Williams” was published in 1986.