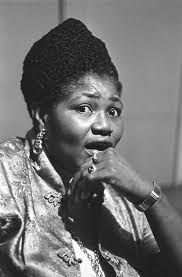 Thornton was born December 11, 1926 in Ariton, Alabama and began to sing at an early age.

At the age of 14, she joined the Hot Harlem Revue and performed with them for 7 years. Thornton began her recording career in 1951 and the next year recorded the hit song “Hound Dog” She was the first to record the song and it was number one on the R&B charts for 7 weeks and sold almost 2 million copies.