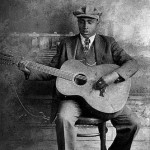 McTell was born William Samuel McTier and blind in one eye on May 5, 1898 in Thomson, Georgia. He learned to play the guitar and loss his remaining vision at an early age. McTell began his recording career in 1927 and in the years before World War II performed widely and recorded 149 songs, including “Georgia Rags,” “Three Women Blues,” and “Broke Down Engine.”

McTell was posthumously inducted into the Blues Foundation’s Hall of Fame in 1981. An annual blues festival in his honor is held in Thomson.