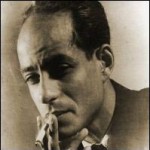 Jacques Roumain was born June 4, 1907 in Port-au-Prince, Haiti. His grandfather served as the president of Haiti from 1912 to 1913. Roumain was educated in Belgium, Switzerland, France, Germany, and Spain. At 20 years old, he returned to Haiti and formed “The Indigenous Review: Arts and Life.” Romain was active in the struggle against the United States’ occupation of Haiti and in 1934 he founded the Haitian Communist Party.

During that time, he was often arrested and finally was exiled. Although not well known in the English speaking world, Roumain is renowned in Europe, the Caribbean, and Latin America. Two of his most influential books are the novel “Gouverneurs de la Rosee (Masters of the Dew)” (1944) and the poetry collection “Bois D’ebene (Ebony Wood) (1945). His writings continue to influence and shape Haitian culture and the pan-African world today. Biographies of Roumain include “A Knot in the Thread: The Life and Work of Jacques Roumain” (1980) and “Jacques Roumain” (1981).