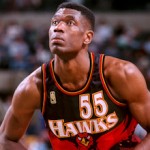 Mutombo attended Georgetown University on a United States Agency for International Development scholarship and in 1991 earned his Bachelor of Arts degree in linguistics and diplomacy. Mutombo was selected by the Denver Nuggets in the 1991 NBA Draft and over his 18 season professional career established himself as one of the greatest shot blockers and defensive players of all time.

Mutombo retired from professional basketball in 2009 as an eight-time All-Star and four-time Defensive Player of the Year. Multilingual, Mutombo speaks English, French, Spanish, Portuguese, and five African languages. In 1997, he started the Dikembe Mutombo Foundation to improve living conditions in the Congo. He has donated $15 million toward the construction of the $29 million, 300-bed Biamba Marie Mutombo Hospital which opened in February, 2007 on the outskirts of Kinshasa.

For his humanitarian efforts, Mutombo received the NBA’s J. Walter Kennedy Citizenship Award in 2001 and 2009. Also, in 1999 he was elected to receive the President’s Service Award, the United States’ highest honor for volunteer service. Mutombo is a spokesman for the international relief agency CARE and is the first Youth Emissary for the United Nations Development Program.