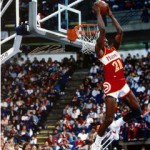 January 12, 1960 Jacques Dominique Wilkins, hall of fame basketball player, was born in Paris, France where his father was stationed in the United States Air Force.

Wilkins led his high school basketball team to consecutive Class 3-A State Championships and entered the University of Georgia in 1979. He was named the SEC Men’s Basketball Player of the Year in 1981 and selected by the Utah Jazz in the 1982 NBA Draft.

As a professional, he was nicknamed “The Human Highlight Film” for his incredible athletic ability and highlight reel dunks. Over his 18 year professional career, he was a nine-time All-Star and won the NBA scoring championship in 1986. His number 21 jersey was retired by the Atlanta Hawks in 2001 and he was inducted into the Naismith Memorial Basketball Hall of Fame in 2006. He currently serves as vice president of basketball for the Hawks and goodwill ambassador to the community.