By Chimsima Zuhri on May 28, 2011 in African American History, May, Military, Politics 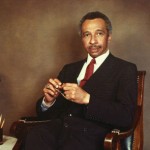 Mitchell was born April 29, 1922 in Baltimore, Maryland. He served as an officer in the 92nd Infantry Division during World War II, earning a Purple Heart. He earned his bachelor’s degree from Morgan State University in 1950 and that year successfully sued the then segregated University of Maryland for admission to graduate school.

In 1952, he became the first African American to earn a master’s degree from that school. In 1970, he was elected to the United States House of Representatives and during his 16 year career was a founding member of the Congressional Black Caucus and fought for affirmative action legislation.

As Chairman of the Small Business Committee, Mitchell attached an amendment to a public works bill that required state and local governments seeking federal grants to set aside 10% of the funds for minority contractors and subcontractors. Mitchell retired from Congress in 1986. He served as chairman of the Minority Business Enterprise Legal Defense and Education Fund until the late 1990s.