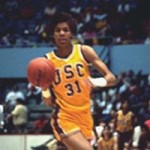 Miller was an outstanding basketball player in high school. She was the first player, male or female, to be named an All-American by Parade Magazine four times, she was awarded the Dial Award as the national high school scholar/athlete of the year in 1981, and she was the National High School Player of the Year in 1981 and 1982.

Miller continued her outstanding play at the University of Southern California where she was a four-time All-American and three-time Naismith College Player of the Year. She still holds USC records for most points, most rebounds, most field goals made, most free throws made, most games played, and most steals. Miller also led the United States Women’s basketball team to the Gold Medal at the 1984 Los Angeles Olympic Games.

Miller earned her Bachelor of Arts degree from USC in 1985. In the late 1980s, Miller suffered knee injuries that prevented her from continuing her basketball playing career. From 1986 to 1991, she was an assistant coach at USC and from 1993 to 1995 she was the head coach. She coached the Phoenix Mercury in the Women’s National Basketball Association from 1997 to 2000 and since then has been a reporter for the NBA on the television station TNT.