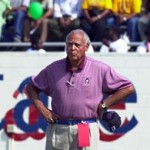 From 1984 to 1988, he coached at Howard University and in 1989 he returned to South Carolina State, where he coached until 2001. Over his career, Jeffries compiled a record of 179 wins, 132 losses, and 6 draws. He won three Black National Championships and seven Mid-Eastern Athletic Conference Championships. In 2010, Jeffries was named head football coach emeritus at South Carolina State and the football field was named in his honor. That same year, he was inducted into the College Football Hall of Fame.