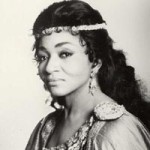 January 4, 1937 Grace Bumbry, considered one of the leading mezzo-sopranos of her generation, was born in St. Louis, Missouri.

At the age of 17, Bumbry won a competition singing the aria “O don fatale” but was denied the first-place prize scholarship to the local music conservatory because it did not accept black students.

Bumbry studied at Boston University, Northwestern University, and the Music Academy of the West before she made her operatic debut in 1960. In 1961, she gained international renown when she was cast as Venus at Bayreuth in Germany, the first black singer to appear there. Bumbry made her Metropolitan Opera debut as Princess Eboli in “Don Carlo” in 1965.

In the 1990s, Bumbry founded the Grace Bumbry Black Musical Heritage Ensemble to preserve and perform traditional Negro spirituals. In December, 2009, she was honored with the Kennedy Center Honors for her contribution to the performing arts.