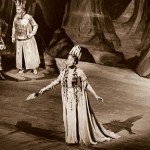 July 11, 1925 Mattiwilda Dobbs, coloratura soprano and one of the first black singers to enjoy a major international career in opera, was born in Atlanta, Georgia.

Dobbs began piano lessons at the age of seven and sang in the church choir. She graduated from Spelman College in 1946 with a degree in music and Spanish and earned a Master of Arts degree in Spanish from Columbia University Teachers College. After winning the International Music Competition in 1951, Dobbs made her professional debut. She sang at the major festivals and opera houses throughout Europe. I

n 1953, she debuted at the La Scala Opera House, the first time a black artist sang in that opera house. Dobbs made her American debut in 1954 and in 1956 debuted at the Metropolitan Opera House. She was the first Black singer offered a long-term contract by the Met. Dobbs refused to perform for segregated audiences therefore she was unable to perform in her home town of Atlanta until 1962.

Dobbs retired from the stage in 1974 and began teaching at the University of Texas where she was the first African American on the faculty. She also taught at Howard University.