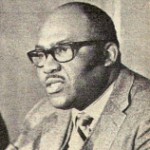 Fletcher was born December 22, 1924 in Phoenix, Arizona. After serving in World War II where he was wounded, Fletcher graduated from Washburn University with a degree in political science and sociology. For a short time he played professional football and he was the first African American to play for the Baltimore Colts. He later earned a law degree and a Ph. D. in education.

Fletcher supervised the enforcement of equal opportunities for minorities in federally funded contracts in the administrations of President’s Richard Nixon and Gerald Ford. He was also an advisor to President George H. W. Bush. In 1972, Fletcher became executive director of the United Negro College Fund and helped coin the phrase “a mind is a terrible thing to waste.”