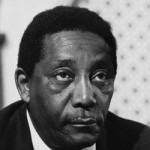 September 11, 1922 James Charles Evers, the first African American elected mayor of a Mississippi city since the Reconstruction era, was born in Decatur, Mississippi.

Evers served in the United States Army in Europe during World War II and graduated from Alcorn A&M University in 1950. In the early 1950s, Evers became active in the Regional Council of Negro Leadership, a civil rights organization that promoted self-help and business ownership. In 1963, after the assassination of his brother Medgar, Evers took over leadership of the NAACP in Mississippi.

In 1969, Evers was elected Mayor of Fayette, Mississippi and that same year was named NAACP Man of the Year. Evers served many terms as mayor before unsuccessfully running for Governor and the United States Senate. He is currently a radio station manager. Evers authored two autobiographies, “Evers” (1971) and “Have No Fear: The Charles Evers Story” (1998).