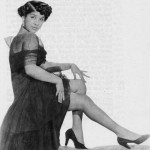 In 1989, Brown won the Tony Award for Best Actress in a Musical for her performance on Broadway in “Black and Blue” and in 1990 she won the Grammy Award for Best Jazz Vocal by a Female for her album “Blues on Broadway.” Brown’s fight for musician’s rights and royalties in 1987 led to the founding of the Rhythm and Blues Foundation. She was an inaugural inductee as a Pioneer Award recipient in the foundation’s hall of fame in 1989 and in 1993 she was inducted into the Rock and Roll Hall of Fame. Brown’s autobiography, “Miss Rhythm,” was published in 1996 and she died November 17, 2006.