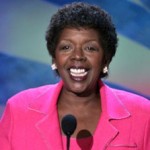 During her time in Congress, she served on the House Ways and Means Committee and was Chairwoman of the House Committee on Standards of Official Conduct. The Stephanie Tubbs Jones Transit Center in Cleveland, Ohio is named in her honor.