By Chimsima Zuhri on September 27, 2010 in African American History, September 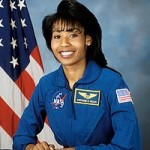 Wilson earned her Bachelor of Science degree in Engineering Science from Harvard University in 1988 and her Master of Science degree in Aerospace Engineering from the University of Texas in 1992. She was selected by the National Aeronautics and Space Administration (NASA) as an astronaut candidate in 1996. After completing two years of training and evaluation, she qualified for flight assignment as a mission specialist.