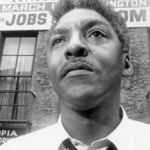 March 17, 1912 Bayard Rustin, civil rights leader and the chief organizer of the 1963 March on Washington for Jobs and Freedom, was born in West Chester, Pennsylvania.

In 1942, Rustin assisted in the founding of the Congress of Racial Equality. A declared pacifist, he was imprisoned from 1944 to 1946 for violating the Selective Service Act.

While in prison, he organized protests against the segregated dining facilities. After his release from prison, Rustin was frequently arrested for protesting against British colonial rule in India and Africa. In 1947, he organized the Journey of Reconciliation, the first of the Freedom Rides, to test the Supreme Court ruling that banned racial segregation in interstate travel. In 1951, he organized the Committee to Support South African Resistance which later became the American Committee on Africa.

In 1957, he assisted Martin Luther King, Jr. in organizing the Southern Christian Leadership Conference. Throughout the 1970s and 1980s, Rustin worked as a human rights and election monitor for Freedom House, a research and advocacy group for democracy, political freedom, and human rights. Rustin died August 24, 1987 and several schools and other institutions are named in his honor, including Bayard Rustin High School in West Chester and the Bayard Rustin Social Justice Center in Conway, Arkansas.

A number of biographies have been published about Rustin, including “Bayard Rustin: Troubles I’ve Seen” (1997), “Bayard Rustin: Behind the Scenes of the Civil Rights Movement” (1997), and “Lost Prophet: The Life and Times of Bayard Rustin” (2004).