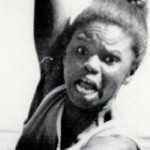 Watson won five indoor and three outdoor national titles between 1964 and 1976 and twice set the United States indoor record in the long jump. Watson retired from competition in 1979 and was inducted into the USA Track & Field Hall of Fame in 1987.