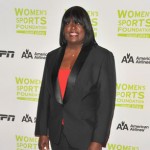 Cheeseborough broke onto the international track scene at the age of 16 by winning two Gold medals at the 1975 Pan American Games. In 1976, she set the American junior record in the 100-meter race.

Cheeseborough has served as the head coach of the men and women’s track teams at Tennessee State since 1999. She also coached the United States sprinters and hurdlers at the 2008 Beijing Olympic Games. Cheeseborough was inducted into the USA Track & Field Hall of Fame in 2000.