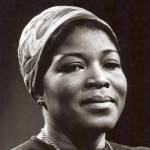 Shabazz was born Betty Dean Sanders on May 28, 1934 in Detroit, Michigan. After high school, she entered Tuskegee Institute and while in Alabama first encountered racism. As a result, Shabazz moved to New York City and enrolled at the Brooklyn State Hospital School of Nursing where she earned her Bachelor of Arts degree in 1958. Also in 1958, she married Malcolm X.

After Malcolm X’s assassination in 1965, Shabazz earned her Master of Arts in public health eduction in 1970 from Jersey City State College and her Ph. D. in education administration from the University of Massachusetts in 1975. From 1976 until her death, she worked at Medgar Evers College. In 2005, Columbia University opened the Malcolm X and Dr. Betty Shabazz Memorial and Education Center and the Betty Shabazz Cultural Center was established at Mount Holyoke College.