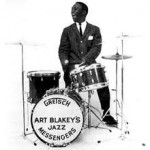 Blakey was born October 11, 1919 in Pittsburgh, Pennsylvania. By the time he was a teenager he was playing the piano full-time and leading a commercial band. Shortly afterwards, he taught himself to play the drums. In 1947, Blakey recorded with a group led by Horace Silver called the Jazz Messengers. When Silver left the group in 1956, leadership passed to Blakey and the group was renamed Art Blakey and the Jazz Messengers.

Over the years the group has served as a springboard for many young jazz musicians, including Donald Byrd, Wayne Shorter, Wynton Marsalis, Terrence Blanchard, and Kenny Garrett. Blakey had a policy of encouraging young musicians and was quoted as saying, “I’m gonna stay with the youngsters. When these get too old I’ll get some younger ones. Keeps the mind active.” In 1984, the Jazz Messengers won the Grammy Award for Best Jazz Instrumental Performance, Group for the album “New York Scene.”

Blakey died “leaving a vast legacy and approach to jazz which is still the model for countless hard bop players.” In 2001 his album “Moanin’” (1958) was inducted into the Grammy Hall of Fame and in 2005 he was posthumously awarded a Grammy Lifetime Achievement Award.