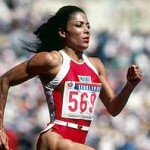 Her world records in the 100 and 200 meter races still stand. In 1988, she was the recipient of the James E. Sullivan Award as the top amateur athlete in the United States. Griffith- Joyner retired from competitive sports shortly after the 1988 Olympic Games and was inducted into the National Track and Field Hall of Fame in 1995. Griffith-Joyner died September 21, 1998.

National Track and Field Hall of Fame, Track and field